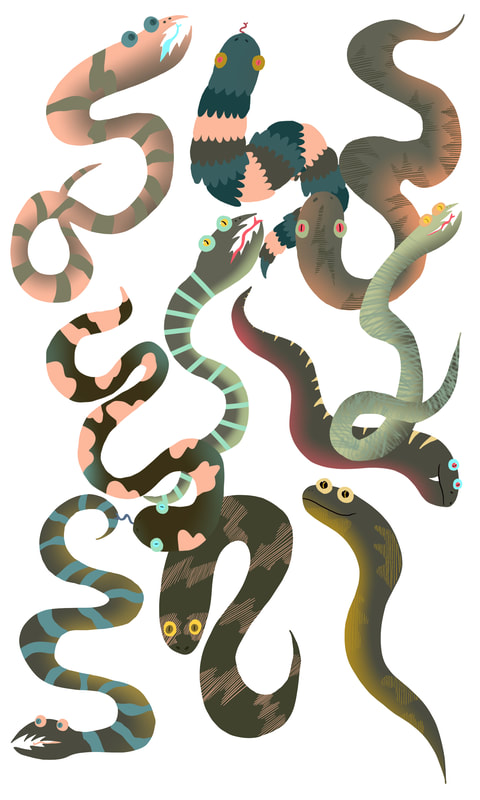 Originally from Winnipeg, Manitoba, Tyson made the move to Montreal, QC in 2003. There he worked as an illustrator/artist as well as opening and operating Headquarters Gallery & Boutique. As of the summer of 2019, Tyson has made Toronto, ON his home.

In 2000 he began exhibiting work as an artist working with galleries from all over the world. In the past nineteen years he’s had 8 solo shows and participated in over one hundred group and collaborative exhibitions. During this time, he has also created work for some amazing companies including, Ford, Cirque Du Soleil, Topps Trading Cards C2MTL and Osheaga Music Festival.

See daily drawings, animations, NFT's  and more by clicking the link below!
https://linktr.ee/TysonBodnarchuk

​
STUDIO VISITS AVAILABLE FOR TORONTO RESIDENTS OR VISITORS!
If you want to swing by the studio and pick up a print, mask or anything else, I'm more than happy to meet you!
Please email me to set up a time at:
tyson.bodnarchuk@gmail.com

Commissions are now open.  If you have something in mind for a tattoo design, mask design, painting or drawing that's a little more personal, please hit me up!

​​Profile
Over 22 years as a freelance illustrator and exhibiting artist, over 10 years of coordination and managerial experience working with creatives and in an office environment.  Exceptional organisational skills and able to deal with tight deadlines.

I have been an international exhibiting artist since 2000 and a freelance illustrator since 2006. Some clients include: Ford, Osheaga Music Festival, Cirque Du Soliel, Topps Trading Cards (Star Wars Galaxy 6 series) and The Art Hustle. I also design and create large foam and fabric masks for clients. One was used for the French web series “Amelie est Partie”,  which was nominated for best costume design for Toronto’s Webfest. Current projects include small promotional animation loops for bands, NFT collaborations with artists and clients and a weekly webcomic called “Swordface & Beautiful Friends''.


Production Coordinator at Picnic Dinner Studios (2019 - Present)
Current project with Picnic Dinner is the UFC series "Fightlore", featured on the UFC Fightpass channel. Duties include: Co-writing the animated segments with the Picnic Dinner writing team, organising and assigning scenes to the art team, providing artwork for boards, preparation of art files to be coloured and updating production checklist spreadsheet.

Owner /Curator of HQ Gallery (2006 - 2011)
Owner and operator of an independent boutique and gallery that showcased works of independent artists and designers worldwide. Every month a new exhibit opened, featuring artwork from new and/or established artists from around the globe.

Co-Founder and Organizer of Smart Design Mart (2008 - 2013)
Owner and one of the founding members of the Smart Design Mart business; a curated annual art and design marketplace showcasing more than 100 designers in a converted 30,000 square foot warehouse. Smart Design Mart was the biggest independent design show in Montreal for its entire 6 seasons.